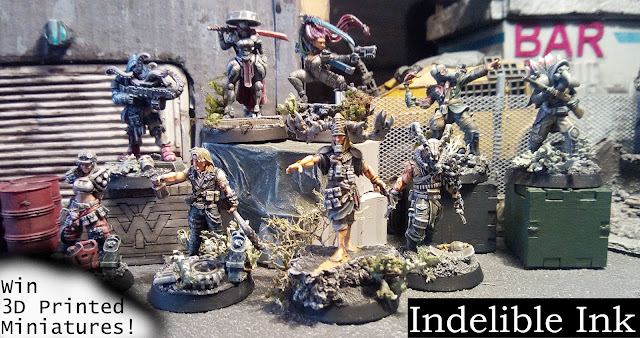 3D printing is probably rightly hailed as the next big thing in the hobby (and it probably already is, for all I know!), and we've all by now seen the images of the kind of things that can be downloaded in the form of STL files and run off on a printer that uses UV-sensitive resin. It's a brave new world, with so much wonder and promise in it.

But what if you don't own a 3D printer for whatever reason? Is there a viable alternative for getting your hands on this kind of thing? Of course there are more than a few companies springing up that offer to print minis for you or sell the ranges that they print on demand. 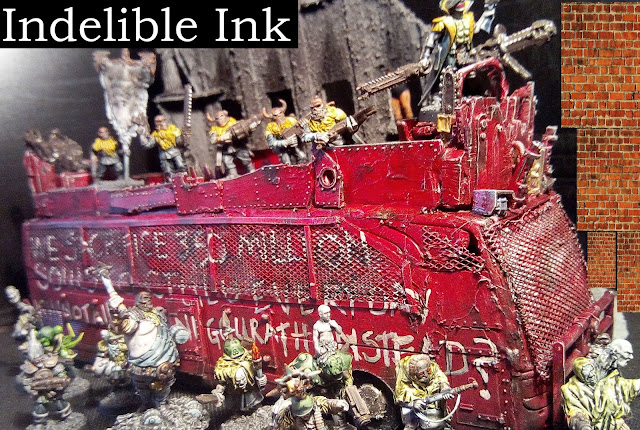 "Bring out your Remoaners!" - the call went out to the wasteland settlements, with no one knowung what it meant, save for it being related to Boareez the Dishevelled, a chieftan of the ancient, pre-apocalyptic Britons...

A little while back, a friend of mine showed me pictures of a model someone had made for Gaslands of the now infamous "Brexit Battle Bus". You know the one - it had a certain statement written on the side of it and sort of divided opinion right down the middle?

Well, he was adamant that I should make one in 28mm scale, and I agreed on the proviso that I could find a coach that would work in 1:43 scale, which I find works best with most companies miniatures and table-top terrain.

The problem is that coaches in that scale are both scarce and expensive if you're buying them in pristine condition. So I had to wait until one popped up on eBay that was cheap on account of being screwed up, but yet not too ruined for my purposes. 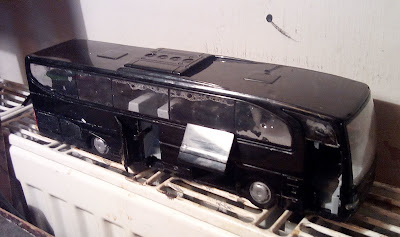 The basic coach turned up missing a door and other small bits, none of which were a concern to me. And so it got a wash, the decals removed with lighter fluid and then a second more intense wash before it was time for turning the thing into something worthy of the wasteland highways. 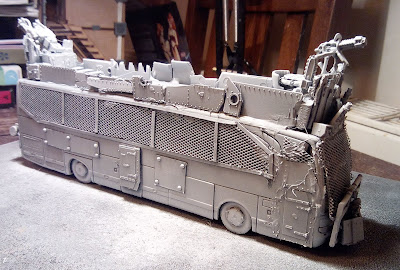 I went into the build with only the vaguest idea of what I wanted the thing to look like, being more inspired by the parts that I was able to find in the bits box and where they seemed to fit. Once I was happy with the look, I gave it a cheap rattle-can prime with black and then a heavy zenithal white. 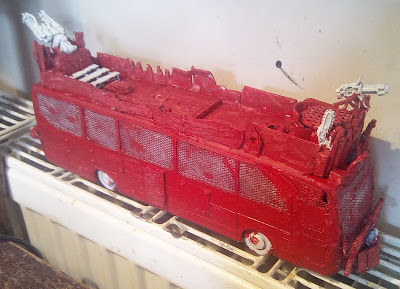 All it took was a couple of coats of red acrylic craft paint to get the basic colour down, and then a tour around the bus with other colours to define the details a little better. Being rough at this stage helped to add to the ruined feel of the bus, and I knew that there was some heavy weathering and washing to come in the next stages. 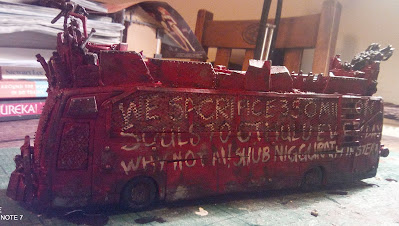 I needed something to write on the side of the bus, but recreating the original slogan seemed to be pretty unimaginative and likely to fly up the arses of people that were on both sides of the Brexit debate, and so I settled on something more in keeping with the post-apocalyptic style of the thing:

"We sacrifice 350 million souls to Cthulu every day. Why not Ai! Shub Niggurath instead?"

For the record, this is supposed to be a bit of fun - not a political statement!

I finished the bus off by weathering it with a dark brown and then a metallic, followed by washing with diluted brown and black acrylic paints and a final dry-brushing with an ivory to bring out the finer details and give the impression of dust.

Let me know what you think, either here or on social media. 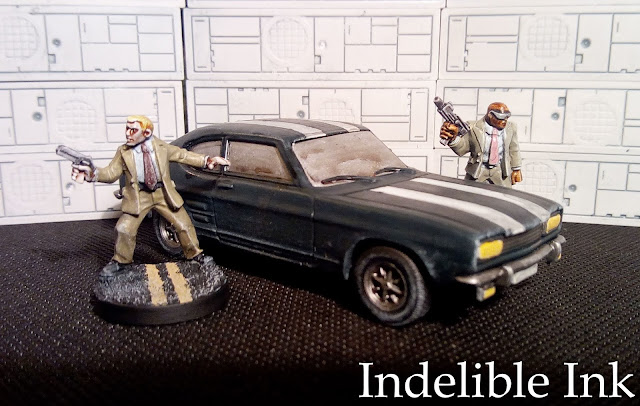 It's not an Audi Quatro, it's something a little better...

No time for a long blog entry this weekend, so I just took a moment to grab one of the cars and a couple of the minis that I've been painting over the dead period between Xmas and New Year to throw together a photo opportunity.

Most people seem to fall for the allure of the Audi Quatro from this period, but as I came to cars from the perspective of American muscle, rather than 80's police dramas in the UK, I'm  more into this kind of thing - plus, my old man drove one of these back in the day. 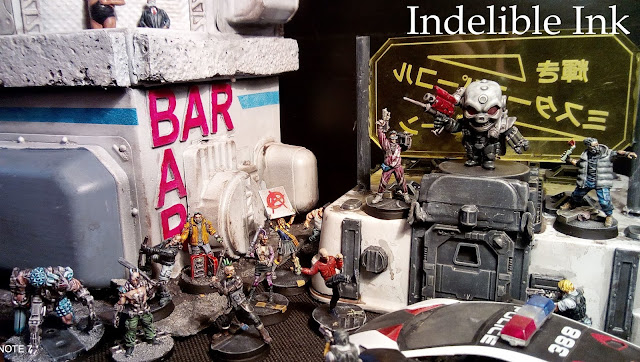 Closing time was always colourful and exciting in the Neon District of Downtown Far Corfe...

Artel W are one of those companies that just seem to be addictive, like once you see one of their miniatures that catches the eye, there's at least a dozen more that instantly become something that you just have to get your hands on. 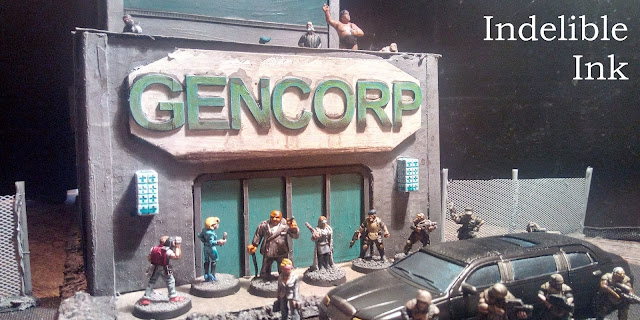 Legitimate businessman, pillar of the community and all-round swell guy Bugsy Capone indulges the local media while his small and discreet cadre of bodyguards stand watch...

Everything and everyone seems to be about Cyberpunk at the moment, and I'm no exception, loving the combination of neon glare, shiny chrome cybernetics and grimy cityscapes for it all to play out against. There's also some amazing MDF terrain out there that adds a wonderful Brutalist aspect to the whole scene too and the mere sight of it makes my palms go sweaty.

Agents of a Rogue Trader rendevous with a pilot returning from an advance scouting mission atop a remote landing pad...
A couple of months ago, my neighbour (who keeps on seeing my various projects being put out to dry in our shared back yard) asked me if I could use a circular metal tray that had been inside of his cooker and was now destined for the bin. I immediately thought of the landing pads that I had seen on sale from various companies and for various different prices, and wondered if it could be the basis of something similar.
Read more »
at December 08, 2020 8 comments: 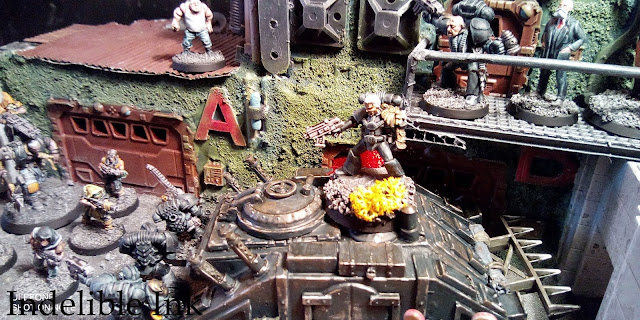 A squad of Marines Penitent shows no qualms when it comes to using extreme force to suppress civil unrest and gang violence in Far Corfe...

Everyone in the hobby that's flirted with GW has gone through their Space Marine phase, and some people never come out of it. But I thought I'd well and truly gotten over mine a couple of years back when I started to be more interested in smaller and more grimy areas of the Grimdark. But the exception seems to be old-school Marines, as there's just something so wonky and charming about them when compared t something like a modern Primaris. So when the chance to get my hands on an entirely new sculpt came along, I was champing at the bit to put my name down. 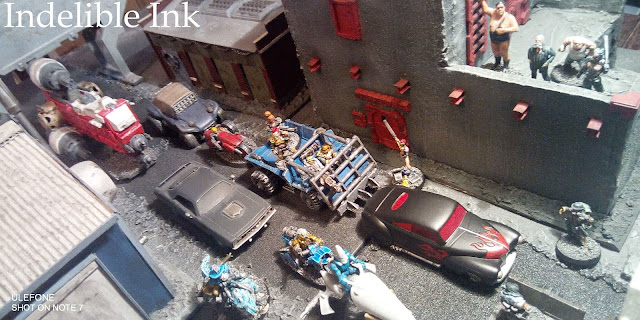 After eating their complimentary buffet from Rat Burger, the official sponsors of the event, the competitors in the annual Windy 500 tear through downtown Far Corfe...
Vehicles always help to make a gameboard pop and add to the effect of the buildings and minis that you use them, and when Axiom over at Magpie & Old Lead posted a wasteland trader with a large saurian carrying his wares, it made me get off my arse and finish my own, as well as realise just how many different vehicles I've worked on over the past couple of years.
Read more »
at November 27, 2020 No comments:

Ramshackle Games - The Pilgrimage of Rust (aka The Tetanus Tribe)

The Pilgrimage of Rust picks its way through a landscape of decaying metal...

We live in an age for the hobby where we're spoiled for choice when it comes to minis, there are a myriad companies, large and small, that are producing a stunningly diverse range of models that are more detailed than anything that I've seen in the past. But that's not to say that there aren't people out there making stuff that harks back to the more old-school feel of minis that I remember from back in the day.

A security patrol walks into the middle of a private discussion, and things suddenly take a turn for the worse...
I'm sure we all have things that we're constantly searching eBay for, and at the moment it seems to be the larger minis that are capturing my own interest. I also keep looking at the miniatures for the game Guildball, which I have no interest in playing for its own sake, but does have an interesting range of models available.
Read more »
at November 19, 2020 6 comments: 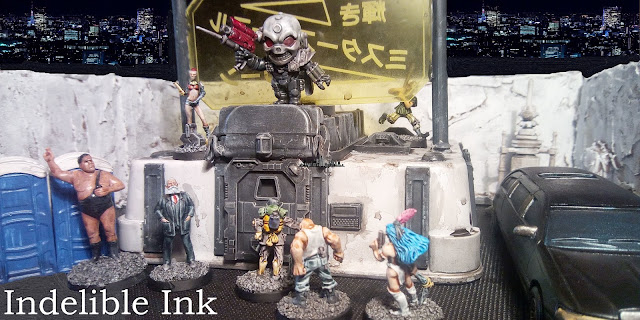 Andre & Engels were known to moonlight as bouncers in the downtown sprawl when tag matches were scarce...

A little while back I dropped a quite popular blog post about some Hostile Environment Hab Pods that proved quite popular (and which you can read here) and so, as I'd always intended to do more builds in a similar vein, I kept my eyes open for something similar the next time I was in the shop where I found the original materials.

The gang's all here - Wasteland Bounty Hunters pose for a rare group photo on the outskirts of the sprawl 3D printing is probably rightl...